Well known paintings throughout history are referenced and presented in a public gallery setting. The Missing Women Series is a playful yet earnest look at how women are presented but not represented in art, society, and history. From a young age, women are 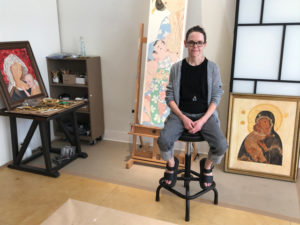 encouraged to succeed and at the same time take on supportive roles. They juggle multiple responsibilities; all while being underpaid and pressured to look picture perfect. The image of the woman’s body is omitted from renderings of famous paintings, leaving on show the board it was painted on, to highlight the lack of documented female genius recorded in history, lack of proportional representation in politics, and other disparities.

Similarly, The Missing Parents Series calls to attention the lack of societal appreciation and wage equality for stay-at-home parents, and childbearing parents. Some of these disparities have been exacerbated with the mass exodus of parents from the work force to care for family members during the pandemic and are due to worsen yet more with the current attacks on reproductive rights.

Charters is a conceptual artist intent on presenting a new perspective of society and history from the female identifying or childbearing/childcaring point of view. She was born and grew up in The Yorkshire Dales in The North of England. She holds a BA (hons) degree from Cardiff College, Wales and an MFA from Chelsea College of Art, London. She studied under the British painter Graham Crowley, printmaker Amanda Faulkner, and was assistant to the sculptor Andy Goldsworthy on two of his larger outdoor sculptures. She has also travelled internationally working in the animation industry. Charters has exhibited in many parts of America, most recently in Fogue Gallery in Seattle, Old Courthouse Arts Center in Chicago, Ryan James Fine Arts Gallery in Kirkland, and Marin County Society of Artists in the Bay Area, also in exhibitions in Los Angeles and the UK. Her solo shows involve a traditional museum-style installation, with tongue-in-cheek docent performances by actor John Serembe as docent, and Yuri Serembe as security guard. She has written and published The Missing Women Book and is working on The Missing Parents Book. She has featured in articles and was on the cover of Kirkland Lifestyle Magazine, Shoutout LA, The Olympian, and Oly Arts magazines. She currently works from her studio in Olympia, Washington.